Geographical conditions for the development of Ancient India

The most striking element of Indian geography is the natural barrier formed by the mountain ranges in the north of India. For India is a continental plate that is crashing into the Asian continental plate. As it does, both continental plates are pushing up the earth where they meet into a forbidding range of mountains. The central mountain range, passing across in the shape of a sword near the northern edge of the Indian subcontinent, are the Great Himalayas. These northern mountains, which are less of a barrier in the west, have naturally isolated India from its neighbors.

All along the southern edge of this great mountain wall are rich soils that are generously rained on. Even though this region lies in the temperate zone, it is lush and subtropical. To the south are the extensive flood plains of the Indus River in the west and the Ganges in the east. With rich soil renewed every year by river flooding and with generous summer rains, these plains in the north are among the richest agricultural areas in the world. It was here that Indian civilization first arose, in the fertile flood-plains adjoining the Indus River. This vast stretch of flood-plain has been the home of the great Indian empires as well, the Mauryans and the Guptas.

The southern portion of India is a large peninsula with a forbidding mountain range all along the western coast, and a large flat plateau in the center of the sub-continent called the Deccan. The eastern coast is flat land and affords many opportunities for harbors; from this area Indian culture had the widest contacts with foreign peoples. The western portion, however, being walled out from the sea and hard to reach by land, subsequently became the seat of the powerful empires of the south, such as the Muslim kingdoms.

India is one of the most culturally, linguistically, and ethnically diverse regions one can imagine. Four major peoples, distinguished by the languages they speak, make up the population of the region. The majority of the population are Indo-European speaking a variety of languages related to European languages such as Greek, German, or English. Precisely when these peoples arrived is subject to much debate, but they seem to have arrived somewhere between 2000 BC and 1600 BC, and brought with them their own religion and social system. 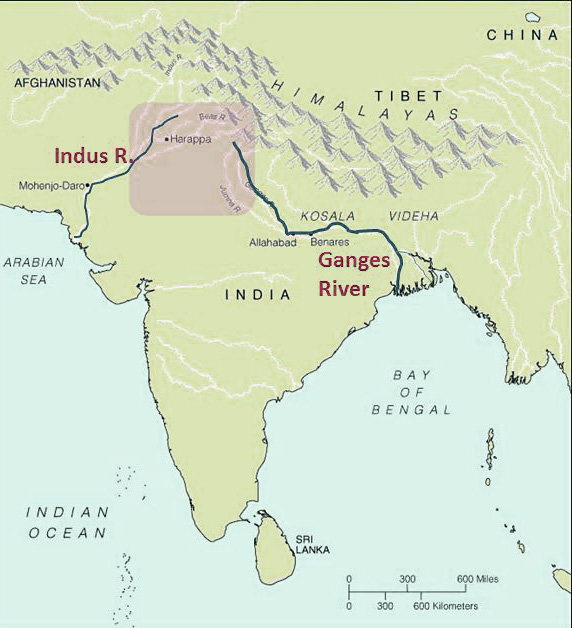 The bulk of Indian religion and almost all of its literature is Indo-European. Second to the Indo-Europeans, but more ancient in India than the later immigrants, are a people who speak languages from the Dravidian family of languages. While we can not be certain, the Dravidians were probably the authors of the great Indus River civilizations contemporary with the Mesopotamian civilizations to the west. In addition, the peoples in the northern mountains speak languages related to Chinese, Tibetan, or Mongolian. Finally, the smallest group, but most likely the oldest inhabitants of India, speak languages from the Australoid family, which are the languages spoken by indigenous peoples scattered throughout southeast Asia and Australia. Australoids are still present throughout the mountainous forests of the Deccan, but their traditional way of life, which was still vital only forty years ago, is beginning to die out.

Each of these peoples speak a bewildering variety of languages; each region of India is dominated by a single language. The major languages, most of which are Indo-European, are: Hindi, Urdu (which is very closely related to Hindi but uses Arabic script), Bengali, Marathi, Assamese, Sindhi, Oriya, Punjabi, Kashmiri, Nepali, Telugu (Dravidian), Tamil (Dravidian), Kannada (Dravidian), Malayalam (Dravidian).

Despite this variety of languages, Indian culture is remarkably fluid and the contacts between peoples frequent and productive. Very few cultures are so tied into the overall geography of their region; Hinduism requires frequent pilgrimages as part of one’s spiritual perfection, so the intercourse between different peoples has been constant throughout Indian history.

In the north, the great mountain barrier. To the south, the great river plains of the Indus and the Ganges, and the large, high plateau of the Deccan. This is the stage on which a complex history took place, and the first act began along the Indus River.