Cyrus II (559-530 BC) – He was the son of Anshan (southwester Iran) King Cambyses I and Medes Princess (Medes – northwestern Iran and eastern Iraq). After the death of his father, Cyrus inherited throne from Anshan, but the main word was led by Medes people, through his mother, which had more power than the actual king did. After the successful rebellion, in 550 BC, Cyrus conquered Ecbatana (Capital of Medes) and he proclaimed himself as king of Medes and Anshan, establishing power of Achaemenids dynasty. He was the first who managed to unite the Iranian plateau into a single empire, Persia, and went to expanding Persia towards west across Asia Minor. In the next few years, he conquered the entire Asia Minor and turned to the largest city of the ancient world, Babylon, which he conquered at the end of 539 BC. He conquered not only Mesopotamia, but he managed to conquer entire Babylonian empire and he broke the border with Egypt.

In this way, he created a strong Persian state. After the conquest of Babylon, Cyrus went further to the west where he led a peaceful policy: he renewed Jerusalem, he allowed the Jews to return from the Babylonian captivity in the country. He renewed Phoenician cities. He needed for Egypt, Phoenician ships because he did not have enough strong fleet. In Phoenicia and Palestine, he prepared a starting point for the development of military forces in order to transfer them to Egypt. This Cyrus II secret plan has never achieved since he died in 529 BCE in the battle with the Scythians.

Cambyses (529-523) – his son Cambyses succeed Cyrus II. Cambyses faced with rebellions in the countries that his father conquered, but he did not tightly connected with Persia. Cambyses focused on Egypt, where at that time ruled Sais 26. dynasty. During period of Sais dynasty, Egypt became stronger country. 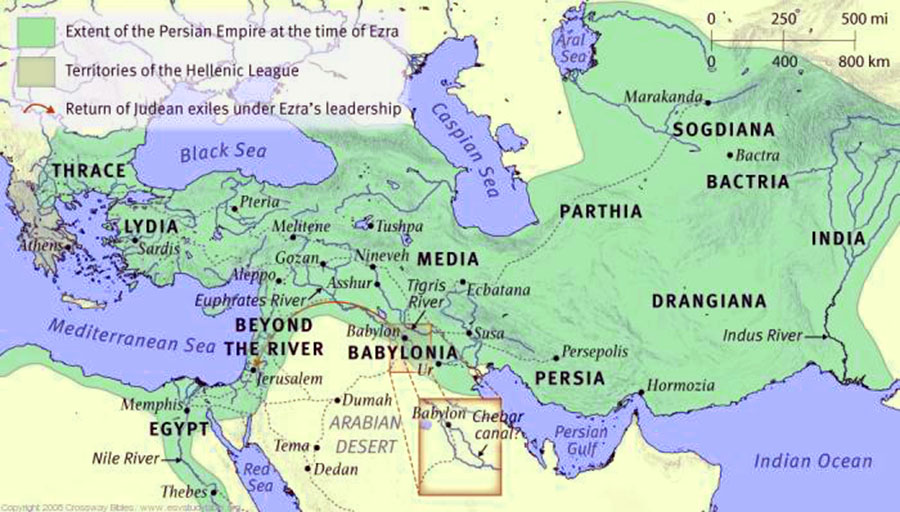 Relying on its large army and a strong fleet of allies, which were Phoenicians and Cyprus, Cambyses in 526 BCE went on a campaign against Egypt. The Egyptians resisted Cambyses attacks in the Battle of Pelusia and in the defense of Memphis. The Persians conquered Egypt in 525 BC.

Cambyses had an unsuccessful conquest of Ethiopia. The priest Gaumata took advantage of the Cambyses absences and the people rebelled over Cyrus.

Great Persian Empire after the death of Cambyses had started to fall apart. In a short period, many rebellions in the kingdom happened against Persia: in Susiana, Babylon, Medes. In rebels participated slaves and the poor people.

Darius I (521- 486 BC) – he succeeded Cambyses. Under Persian rule again were Persia, Susiana, Medes, Assyria, Egypt, Scythia, Margiana, Sattagydia. Darius I reforms: he conducted a series of reforms to strengthen the government of the Persian empire. He divided the entire country in a number of areas (satrapies), each area had to regularly pay tax to the imperial treasury. He conducted a monetary reform establishing for entire country a unique gold currency (darik – 8.4 gram of gold). He built an extensive network of roads and reorganized the army.

The foreign policy of Darius I: in order to reach the Indian gold, he was seeking to penetrate further into India, so Darius I ordered to investigate the flow of river Indus and marine route from the mouth of the Indus to the Red Sea. In order to connect more firmly Egypt with Mesopotamia and Iran through waterway he finished great works that Pharaoh Necho II started. He finished digging of the channel from the Nile to the Red Sea.

Darius was specially attracted by the countries, which settled north of Iran: Bactria and Saka. He expanded Persian territory from the Caucasus in the north all the way to the east to river Indus. He was preparing to conquer areas in European continent and to move the Persian authorities on three continents. After approaching to the areas of the Aegean Sea, which were inhabited by Greek tribes, Darius began systematic preparation for further penetration of the West, aiming to conquer all areas of Greece. He started to fight with the Greeks, he conquered Thrace, some parts of Macedonia and Samos, as well as other Greek islands, reaching the coast of the Aegean Sea. This was the beginning of a period of long Greco-Persian Wars. His campaign onto Greece unsuccessfully finished in the fields of Marathon in 490 BC where he was defeated by united Greek army. Darius died by natural death in 486 BC.

Xerxes (486 – 465 BC) was son and successor of Darius I. He was determined to continue the Persian conquest of the west and he famous for his massive invasion of Greece (Greco-persian wars) in 480 BC.
That campaign marked the battle of Thermopylae, Salamis, and Plataea. Although he was successful in calming of Egypt and suppressing one of Babylon’s revolt, his defeat by the united Greek cities-countries marked the beginning of the fall of the Persian empire. This defeat disappointed him; Xerxes withdrew to his palace at Susa and Persepolis. The last few years of his life he, once a vast treasure collected in trade and taxation, spent on launching vast construction projects, which mostly, were never completed.

The death of Xerxes was the final turning point in Persian influence in the ancient world. Occasional flashes, some of his successor’s abilities were too rare and insufficient to prevent the coming collapse of the Empire.

The final act took place during the reign of Darius III (380-330 BC) who came to the throne by making court intrigues. He did not came to throne because he was capable to be a ruler. His only success was quelled rebel in Egypt, in 337 BC, but immediately after that, he suffered a terrible defeat at the Battle of Granicus (today river Biga Çayı) in 334 BC of Alexander the Great. Persepolis fell to the young Macedonian conqueror in 330 BC, and Darius III, last of the Achaemenids bloodline is killed the same year in the run from the Macedonian Army.

In the struggle for power, after the death of Alexander in 320 BC, Alexander’s general Seleucus I took the reign of the Persian provinces of the Alexander’s former empire into his own hands, but the unity of this country shortly lived. Rebellion of Indian parts of the country and the war that followed, Seleucus kingdom break into two parts, on to the two opposing nations, Parthians, and Bactria. Persia was practically reduced to the territory of the old Anshan and every trace of the former Empire was lost.

1,765FansLike
104FollowersFollow
Next articleThe organization and economy of the Persian (Acheamenid) empire
Go to mobile version