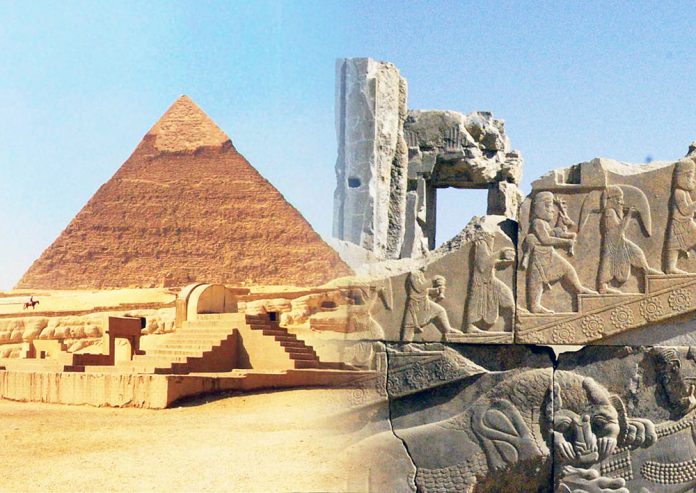 The rise of civilizations in Egypt and Mesopotamia occurred about the same time and both civilizations grew along mighty rivers. There were many similarities but many differences as well. In each case, it was the river valley and geography that dictated outcomes affecting agricultural prosperity, religious formation, and government structures.

The Role of Geography on Egypt and Mesopotamia

Both regions experienced an influx of previous nomadic peoples during the latter Neolithic period in what became the Agricultural Revolution. In Egypt, the Nile River overflowed its banks annually, depositing rich natural fertilizing elements that enabled Egyptians to grow wheat and barley, often providing a surplus. While the yearly rise of the Nile in Egypt was predictable, this was not the case in Mesopotamia.

Both the Euphrates and Tigris Rivers frequently caused destructive floods, inundating villages and cities, killing people and livestock. Unlike Egypt, which was protected from outside invasion by natural barriers, Mesopotamia was a vast open region. As civilizations rose and fell, new empires were born making the Ancient Near East an unending battleground.

Political Institutions In Ancient Egypt and the Ancient Near East

For most of its long history, Egyptian government was led by the Pharaoh, a semi-divine king who was assisted by a vizier and an army of bureaucrats. Powerful dynasties ensured the continuance of prosperity, interrupted only during brief periods of civil strife and the beginning of outside invasions at the end of the Middle Kingdom.

Mesopotamia, however, began as a series of antonymous city-states, self governing and competing for power. Not until 2370 B.C.E. was the Middle East united for the first time under Sargon the Great as he established the first Semitic dynasty that could be called an empire. With the fall of Akkad, one powerful group after another conquered the region, beginning with the Amorites, and continuing with the Hittites, Kassites, and Assyrians. Not until Cyrus the Great established the Persian Empire was long term political unity achieved.

Religious Differences between Egypt and Mesopotamia

Earliest religious awareness was closely associated with nature and environment. Because Egypt was the “gift of the Nile” and generally prosperous and harmonious, Egyptian gods tended to reflect a positive religion with an emphasis on a positive afterlife. This would only change late in the New Kingdom as the fortunes of Egypt changed. The most popular god, Osiris, was also the law giver as well as the custodian of the world of the dead.

In contrast, Mesopotamian religion was bleak and gloomy. Ancient Mesopotamian prayers demonstrate the lack of relationships with gods and goddesses who viewed humans with suspicion and frequently sent calamities to remind everyone of their humanity. Such was the message found in the Gilgamesh Epic.

A notable exception was the Hebrews, whose concept of early monotheism separated them from their neighbors. The Hebrew god could be vengeful and destructive, but he also established a series of “covenants” with his chosen people providing redemption and the promise of a coming Messiah who would establish a kingdom built on justice. Hebrew prophets expanded on these themes, conveying both the anger and the love of the Hebrew deity.

Similarities Tied to Civilization and Culture

Both Egypt and Mesopotamia developed systems of writing that began as pictograms and were primarily used for record-keeping. In both civilizations, a system of schools emerged, training young boys as scribes, an integral part of the ancient social class structure.

Both civilizations actively engaged in trade, building commercially prosperous societies dominated by the wealthy aristocracies and promoting a growing merchant and artisan class. All of these similarities, it can be argued, were the characteristics of cultural development, identified as a necessary element of civilization. Although both Egypt and Mesopotamia developed at the same time, environment and natural forces affected differences in political systems, religion, and social stability.

Large number of bottles from 6 century discovered near Istanbul

Rich grave of a warrior or priest from Bronze age unearthed...

Secret passage and skeleton from Hittite period founding in Turkey